One thing that is easy is putting on 75 extra pounds. It takes time, but no real effort or planning. In this case, "Easy come, easy go" is not applicable in the least. I recently was reintroduced to a photo that was taken on the day after my father's funeral. It is one of only two occasions when I can remember all of my siblings being together. The photo is a reminder of how far I have come since I began running. This was not my heaviest, but a year before this, I was in fairly good shape after joining Weight Watchers Online in early 2011. That was the second of three extended efforts to loose weight. At the time, it seemed like success, but it was just part of the roller coaster ride. 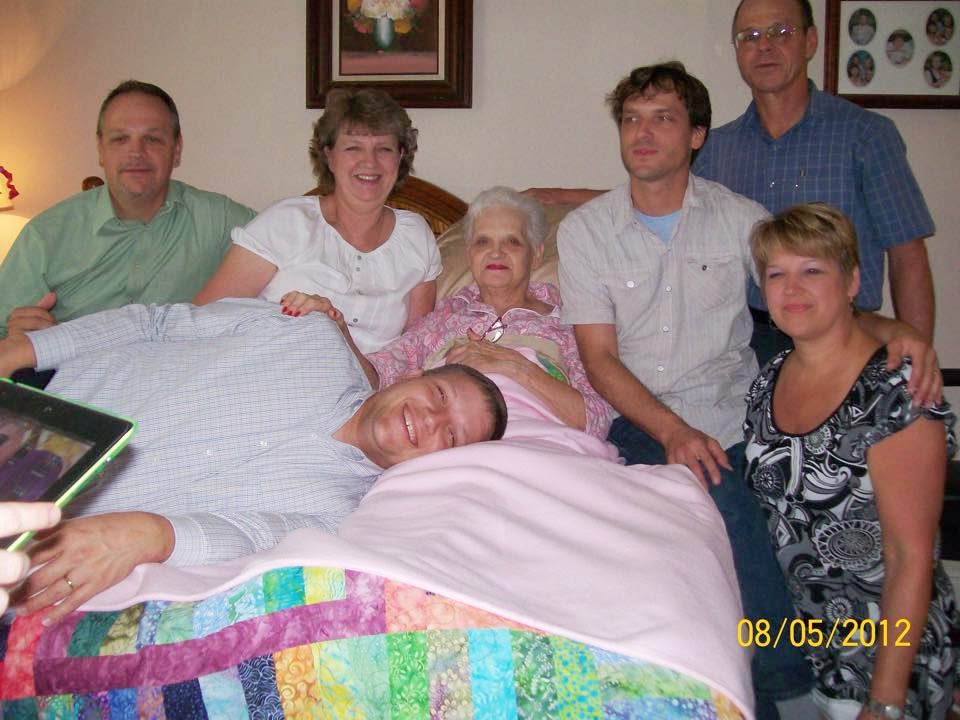 Something that is definitely not easy is taking off those pounds. What I discovered from June to August of 2013 is that it gets harder the older you get. It's not all about weight, and no one should obsess about weight, but it is a key indicator to overall fitness. For me, I still have to make myself step on the scale at least once a week. It bothers me when I step on and see that I'm up a few pounds, but it is an important marker to watch. If I'm afraid to step on that scale, then I know that it's not going to show what I want to see.

I must acknowledge that it was God Who put things in order for me to have the opportunity to make a serious change. He put people in my life who would be great examples and motivate and encourage me. Probably the single most notable person is my pastor, who had embarked on a similar journey at the beginning of 2013. That one spark to begin running has grown as I now have more friends than I can count who are genuinely interested in my fitness journey. It seems every week that God puts a new person in my life who can encourage me. Also, now I feel like I am able to be an encouragement to others. That is the main purpose why I started to write about running.

Running has also allowed me to minister and be ministered to spiritually. Another thing that I now find easy is talking to others about running. And I must admit that I find it not so easy to talk about what Christ has done for me. There are more similarities than I could possibly list between a lifestyle of running and living for Christ. For example, some think they are not capable, some people do it occasionally when they feel like it, some are committed to it and passionate, some are way more committed than you can imagine, some seem to be specially gifted, while others just hate the thought of it. One thing that stands in my mind is that if I can talk about how much I love to run to someone who hates the thought of running, why is it harder to talk about the love of Christ, even to those who don't seem to care. Another similarity of running and the Christian life is that it is easier with help from others. I am so thankful for my church--not the building, but the people. Likewise, I am also thankful for my running friends who understand the challenge, provide encouragement and hold each other accountable.

Easy is a relative term. Running is not easy, but it does get easier with training and time. And the reward is well worth it. Many say, like I used to, that they can't run for one reason or the other. I've said it before and I'll say it again, if you have not given it a truly serious try then it is not accurate to say you can't. My problem wasn't that I couldn't, it was that I wouldn't. My back truly hurt at times I tried to run in the past, and that was an excuse for me. Now I realize that if you don't ever do a strenuous activity,  then when you do, something should and most likely will hurt as a result. How could it not be a shock to your body? Yes, running like any activity can cause pain, but there is a difference between pain and injury. Sometimes, even now, it is tough to tell the difference in pain and injury. Anything that is going to get someone like me back into shape after letting themselves go is going to hurt some, and probably a lot. Even if you find that you truly can't run--and I realize that running isn't for everyone--there is most likely something that you can do. The time to do that is now. But it can't be a whim or a shallow goal, it has to be a firm commitment with as solid plan. You don't have to do it perfectly according to plan every time, but you do have to stick with your commitment and continue to challenge yourself.

Even though running isn't easy, running with a local group like the ones I have found through the We Run Huntsville Facebook page, sure does help. You are guaranteed to find those who are slower than you and those who are faster than you. But knowing that you are all on a similar journey and you are not alone can make all the difference!

Another thing that isn't easy is racing. Since my post in  March, I have run 5 races: a 10-miler, two Half Marathons, a 5K and finally a Marathon.  That brought my total to 21 races since March of 2014. My most recent race brought an end to a string of 20 consecutive PRs. Here's a quick recap of the last 5 races: 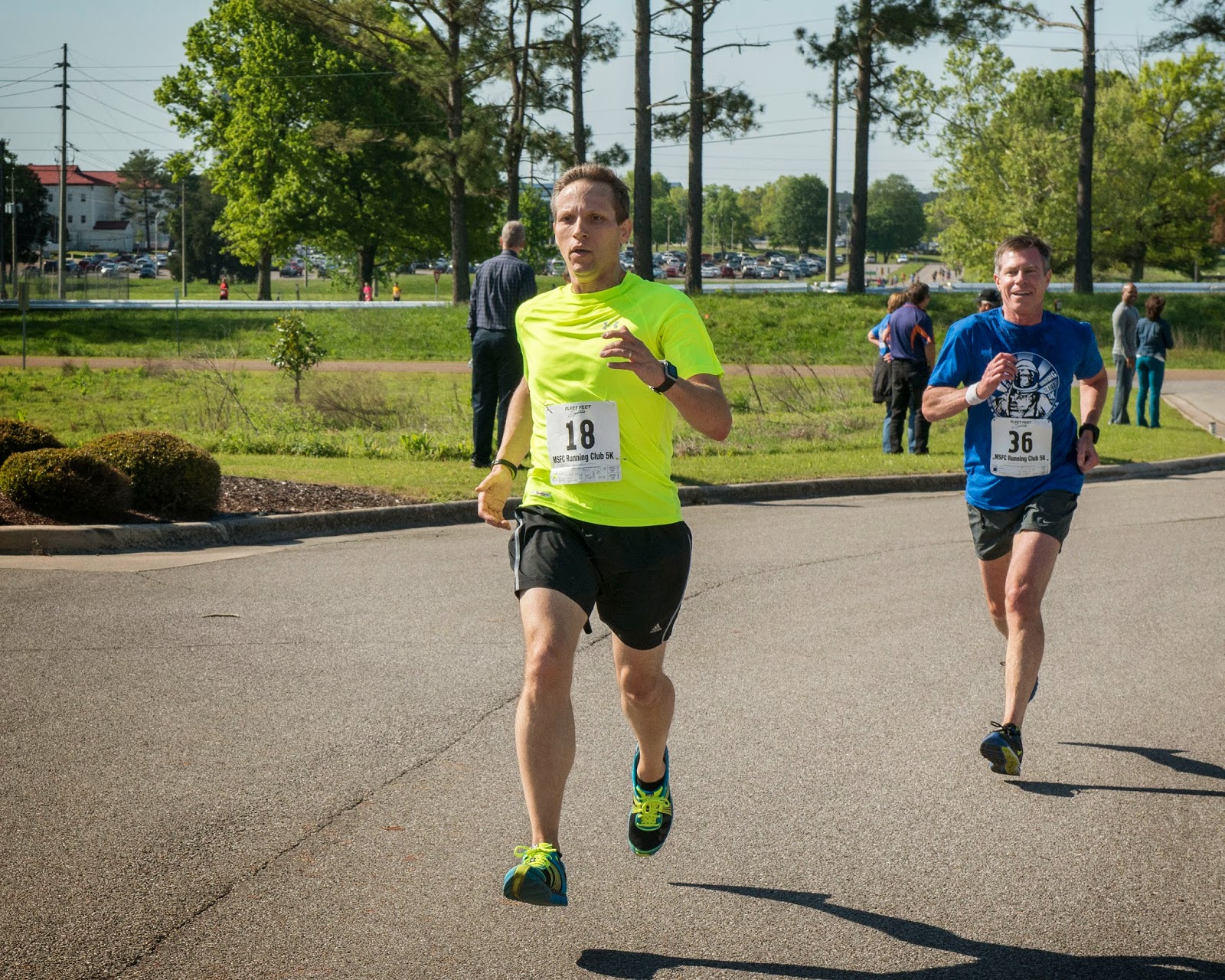 Two highlights of this list are the first time running a race the second time and hitting a sub-7 pace. The Bridge Street Half Marathon in 2014 was my first race of this distance. It is hard to believe that a year later I ran it more than 40 minutes faster (and 35 pounds lighter). Another goal of mine has been to hit a sub-7 mile.  I had done this once in training on a slightly downhill stretch, but it is really cool that I could average 6:52 pace for 3+ miles at the Marshall Space Flight Center 5K.

One thing is for sure from the Country Music Marathon. Marathons are not easy, especially when you allow other racing to interfere with smart training. In hindsight, I should not have signed up for this Marathon. For one thing, it's in the South in late April, which means the weather probably will be too warm. It was over 60 degrees at the beginning of the race and over 70 by the end, and the humidity was high, with only a few clouds to provide shade. Ideal temperature for a Marathon is in the 40s. Another reason I should not have run this was the timing relative to other races I had planned. In the end, the only reason I signed up was because it is really the last opportunity for one in driving distance until the fall. I guess my goal to get 3 marathons in this year got the best of me. Still I have no regrets and learned some important lessons.

As much as I wanted it to continue, the string of PRs in races had to end some time. One of the ways I got the string to be so high was running many different distances and spacing them well. To date, I have raced 3 5Ks, 2 8Ks, 2 10Ks, 2 15Ks, 2 10-milers, 1 25K, 5 Half Marathons, 3 Marathons and a 12-hour race that turned out to be 55 miles for me. On the schedule right now is a 10K (Cotton Row Run - Late May), a 5K (A&M Cross Country - June) and a Marathon (Marine Corps - October). After that, I have thoughts of doing the Huntsville Track Club Grand Slam (which consists of a November 50K, a December Marathon and 50K and then a very tough January 50K). I hope to run a few other races over the Summer and Fall, but will try to keep it smart and not overdo it again. Right now, I am going to take a few weeks to recover. I will be running, just not training hard or racing.

One final thing that I will say is easy is volunteering at races. I have been able to volunteer for a few since my last blog: McKay Hollow Madness 25K, Double Helix Dash 5K and Bridge Street Half packet pickup. Not only is it easy, it is very important and rewarding. These races take a lot of effort and could not happen were it not for volunteers. I try to thank as many volunteers as I can, but there is never enough that could be said. If you are a volunteer, please know that you are very appreciated. Even if you are not a runner, you can still volunteer.
Posted by Unknown at 8:15 PM