A couple of posts ago, I mentioned Marathon Maniacs, so today the promised more details are ready to share. First, though, a little about the latest race endeavor.

For reasons that may become clear by the end of this write-up, I decided to sign up for the Delano 12 Hour race in Decatur, AL. This race is on a one mile loop in a rather simple park just a few blocks from downtown. I had heard of a similar race in Georgia, and when I was describing it to someone, they said it sounds like Delano, which is less than 20 miles away from from my home. There are three options for the race which all began at 6:00 AM on March 7, 2015. There is a 50-Mile Solo, where the runner makes 50 loops as fast as they can; a 12 Hour Relay, where teams of 2-4 take turns running the loop for 12 hours; and a 12 Hour Solo, where one individual runs as many loops as they can or want before 6:00 PM. I did not know if I could do the 50 miles, so I opted for the 12 hours. As with all my races, I set a minimum and then a "in my dreams" goal. For this one, since it was based on distance, that was 31 miles (or 50 kilometers) and thought maybe I could get 50.


Either way, as long as I made it past 26.2 miles, this would be my first "ultramarathon" or ultra. For those unfamiliar with that term, the official marathon distance is 26.2, and an ultra is technically anything longer than that.  Also, any race that is not not 26.2 miles is NOT a marathon-just a little distance runner pet-peeve.

The 26 to 55 has in the title has a dual meaning. One of those is the morning low and afternoon high temperature for the day. North Alabama has been experiencing a strange weather pattern recently. In fact, our area went from 77 degrees on the afternoon of Wednesday, March 4, to an ice storm the next morning. This meant work was closed on Thursday and Friday before the race. I did have a major webinar that I had to present to NASA IT folks all over the country on Thursday, so it was not as relaxed as it might have been. Still, I got the benefit of some extra rest and better access to carbs leading up to the race. On Friday afternoon, I made a trip to Montevallo University to take my son to an Honor Band event.  I made it back by 9:00 and promptly got my things ready and hit the sack.  By 3:00 AM Saturday, my mind was starting to go into race mode, so I tried to relax and rest more, with plans to to be on the road by 5:00. During this "can't sleep" time, I thought back to the worship service before the Mercedes Marathon and tried to focus my thoughts on the Creator and Sustainer and pray for those racing, those volunteering and those who would benefit from the proceeds of the event (Developmentally Disabled Persons of North Alabama).

I arrived at the race in time to pick up the packet, which included: a cotton T-shirt, race bib, timing chip, some nice giveaway items from 3M, a drinking glass and a plaque engraved with my name and "Delano Park 12 Hour, March 7, 2015".  Below that was a space for a smaller plate that would be filled in after the race with the total number of miles or loops.

The day started out very cold, we'll call it 26 degrees as the title suggests (but it may have been a little cooler). We were warned that there was ice on several locations on the winding path, and before I knew it, I was running. I started at a comfortable pace and before I knew it I had the distance of a Half Marathon behind me in just over 2 hours. With the long day, I knew I needed to get some fluids and food in me, so I stopped briefly. During this stop, I also did something that I would find myself doing frequently this day: getting the rocks out of my shoes. Then ran through to mile 18. At this point, the temperature had risen, so it was time to go to shorts and a T-shirt. I really took it easy for the next 6 miles, then made a plan to run through to the 50K mark. I hit the marathon distance right at 5 hours and then 50K (31 miles) was completed at 5:59:03.

For a large part of the day, we also had some Sandhill Cranes that are spending the winter at the Wheeler Wildlife Refuge circling above and making a lot of noise. It was a neat thing to see and hear. By noon, all the ice had turned to mud. I stopped to change my socks and then started back walking. At this point and I called my mom to check on her. She was thinking I had done enough running and I assured her that I would not overdo it for the rest of the day. I knew I could stop any time I wanted. I also had a new goal in mind and that was to complete 53 miles, which would be a little bit longer than two full marathons. I also thought to myself that 55 would be a nice round number, but wasn't sure I could do it.

The temperature had now risen close to the high for the day of 55 degrees, so I felt I could not go many more miles running, without risking some serious health problems. After walking to mile 35, it was time to run some more. By the 8 hour mark, I was completing mile 40. I walked about half of the next five miles, but by this time I was really starting to get tired. I also knew I had 50 miles in the bag.  Also, I was enjoying visits from some of the TOTALLY AWESOME running friends who came to cheer and brought food, like watermelon and Starbursts, and run with me! During a time of my mouth feeling very dry and trying to stave off dehydration, I walked mile 46 to mile 50.  It was then that I realized my watch battery was dead (which was expected, because its advertised run time is 10 hours).

Once I felt refreshed and comfortable, I developed a plan for the remaining time, which was 1 hour and 10 minutes. By this time, I felt I really had to throttle my efforts to keep from ending up at the hospital. I decided, that a good plan would be to run to mile 53 and then walk to cool down the last two miles. I knew that with this plan, I could do five miles easily in the time allotted. I clocked mile 53 in just over 9 minutes, which was one of the fastest of the day. I then walked briskly through mile 54 (at a 13 minute pace) and slowed through the final mile, where I walked across the finish line for the last time at 11:52:54. I felt really good at the end of the race, and think I could have ran for the final 1:10. On the other hand, I feel would have been in much worse condition at the end if I had pushed. This will be good information to help train and race smarter in the future. The 1st place finisher ran 73 miles and I ended up in 11th.

So, now you can see the second meaning in the 26 to 55 title. The furthest I have ever raced, is now 55 MILES, instead of 26. In the end, I don't see ultra racing being something that I will do much. Still, if there is one thing that running has taught me, never say, "Never". I can't really disagree with the people who think I'm crazy. When I tell them that it was a one-mile loop, they really go crazy. I can see their point, but for me running my first ultra, this was the perfect setup. It was so nice to know that I was never more than a mile away from anything I needed.

At this point, 4 days later, I feel tired, but mostly recovered. The losing an hour for the Daylight Savings Time change didn't help, since I still was at church early for a full day of activities. It has been raining A LOT this week, too, which always makes me feel tired. 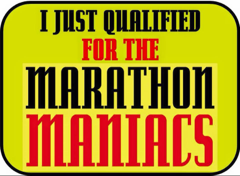 Finally, to answer the question, "What is this about Marathon Maniacs?" Quite simply it is membership organization for people who like to run marathons. There are several levels of membership with the lowest being Bronze. In order to qualify, you have to complete 3 marathons or ultras in 90 days, or 2 in 16 days. With this ultra, I completed my second in 13 days and my third in 85 days, going back to the Rocket City Marathon. There are 8 more levels, the highest being Titanium, which requires at least 52 total, 30 in 30 states, OR 20 in 20 countries-in 365 days! One of the many benefits of membership is discounts to some marathons. I am #10692. According to their information, there are only 132 other members in the state of Alabama.

Many thanks to all who made this race and all my running successes possible! To God be the glory!